As Crops Emerge So Will Crop Pests 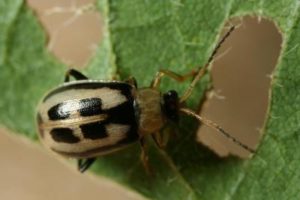 As Crops Emerge So Will Crop Pests

It’s hard to believe but the 2020 planting season has been completed or is finishing up across most of the Jacobsen sales territory. The mild winter and spring that we have enjoyed is a welcomed change but we are not the only ones to benefit. Mild winters often coincide with high survival rates for a variety of crop pests. For example, ISU has released data from a predictive model showing high bean leaf beetle survival. This model suggests that 50+% of overwintering adults (Photo right by Winston Beck) may survive in Southeast and East Central Iowa. This indicates a much lower than average number of days where temperatures dropped below 14˚F. While each overwintering insect will have a different fatal temperature, it is a good reminder that other overwintering pests may have gotten off easy as well.

Pests that migrate instead of overwinter are also beginning to be noticed in the region. UNL has recorded a ‘significant flight’ of black cutworm moths in the Southeastern part of the state. While adult flights cannot be used to make control decisions, they are a good indicator of when and where to begin scouting. Both UNL and ISU track these adult flights across their respective states and post updates online regularly

Control of crop pests is a challenge many farmers face each year. However, it will become more of a challenge for the bottom line as prices continue to drop. Now more than ever it will be crucial to manage pests with accurate scouting, usage of economic thresholds and responsible application of pesticides. Talk with your Jacobsen Seed Representative about resources to help manage early season pests on your farm.

Pests to Watch For

• Black cutworm – Black cutworms do not overwinter this far north. Adults are blown up from the south during spring storms. Females are attracted to plant matter such as weeds, cover crops or heavy residue for egg laying. Black cutworm larvae can be controlled with Bt corn but the following traits are susceptible: VT DoublePro, 3000GT, GTCBLL. Damage is generally sporadic.

• True Armyworm – Adults also overwinter in the south and come up during spring storms. They are attracted to grass areas such as pastures, cover crops, waterways, or roadsides. Damage is generally along these areas as larvae migrate in search of food. True Armyworm is generally NOT covered by Bt genes.