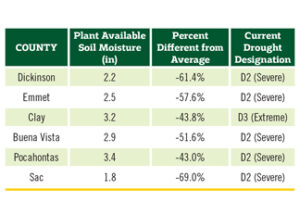 Happy New Year! As we roll into 2021 I can only hope things get easier than they were in 2020. One of the many issues we dealt with last year was a large, and increasing, area of drought. Areas in Nebraska, South Dakota, Western Iowa and Southeast Minnesota were hit hard. This pattern is part of a much larger drought impact being felt throughout the country, especially the west. Depending on the source of information, 65%+ of the country is currently short of soil moisture in some way. This leads many growers to wonder how their moisture is sitting and what, if any, changes need to be made to management.

The chart on the right shows western Iowa subsoil moisture taken November 9th by ISU extension agronomist Paul Kassel. I have also shown the percent change from normal and the current drought designation for these counties. When looking at this drought data and the current drought map, we can estimate much of the sales area is likely sitting at 50% below normal soil moisture levels. While significant, the deficient is not impossible to overcome. The months of March and April will be crucial to a strong soil recharge. On average, Northwest Iowa will receive 5 inches of rainfall during those months with 80% of that water going towards soil moisture. There are many, many springs were this number has been easily exceeded and starts the growing season with a full tank. It’s not time to panic quite yet. The current La Niña pattern (aka colder than average ocean temperatures off the west coast of South America) is likely to weaken and fizzle out by spring or many summer. While in place, we may see warmer than average winter temps. This could allow us to take more advantage of winter moisture for soil replenishing.

Prepare for a drought?

When it comes to ‘preparing’ for a drought the most that growers can do is choose more stress and drought tolerant hybrids. Populations can be managed somewhat but University of Nebraska-Lincoln has a study where they conducted simulations over 31 years of weather conditions (1982-2012) and looked at Low, Medium-Low, and Medium plant populations. For rainfed sites there is a strong yield response to population even when fields are at 50% of normal water capacity at planting time. They concluded that on average, most areas will get enough rainfall to pay for the additional seed with profit. They suggest not changing from your medium plant populations. For dryland corn acres in areas such as central Nebraska, their data suggests that plant populations should be cut in years where soils are at 50% of normal at planting time. The average rainfall in that geography is not enough to sustain higher corn populations.
We have lot of time to collect rain between now and planting time. In the meantime, these are some interesting points to consider over the winter months!