Expect An Uneven Harvest for 2020 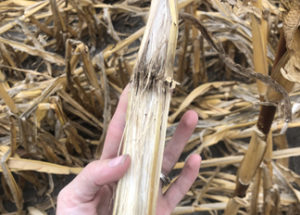 Expect An Uneven Harvest for 2020

2020 has been an intense rollercoaster of issues and emotions and its not even over yet! Harvest will soon be upon us thanks to an ever increasing drought and severe storm damage. These conditions are likely to throw farmers some major curve balls but they aren’t anything we can’t prepare for. In general we will be looking at high levels of yield variability in the field, the potential for lighter test weight in corn, some kernel rots, and stalk lodging due to stress.

According to Iowa State University, drought during grain fill can lead to a yield loss of 3-6% per day. Yield checks for silage in Sac County, IA are ranging from 20-240 bu/ac (there’s no typo I really mean 20). All of this variability is making it hard for growers to plan for on-farm storage vs. selling right out of the field. Take a few minutes to understand how much on-farm storage you have and quantify it into an average bu/ac instead of just a total. Then call your Jacobsen Seed Representative for help with kernel counts in the field. While they aren’t an exact measurement, the averages you get from those checks can be easily compared to your storage number for help planning.

It is important to keep track of test weight as well. Crops that die prematurely from either drought or storm damage are likely to have small kernels and low test weights. Combine settings will need to be adjusted from the last few years of record yields and test weight. Every kernel counts even more this season and loses on the front or back end are unacceptable. Another concern is that very low TW or damaged grain might need to be kept separate. Speak with your insurance adjuster to understand how it would impact your policy.

Crops that have died prematurely may also have a higher risk of suffering from ear and stalk rots. Ear rots such as Common Smut and Aspergillus are likely to be the most common during a hot, dry year. Common Smut will appear as large gray/black galls but does not produce a mycotoxin and therefore does not generally impact quality on a large scale. Aspergillus species on the other hand can produce a mycotoxin known as aflatoxin. Keep an eye out for this powdery yellow green mold. End users such as ethanol plants are very sensitive to some mycotoxin levels. This is because the toxins will be concentrated products like distillers grains and would be harmful to some animals.

Drought and storm stress can lead to a higher incidence of lodging and stalks rots. This occurs because the plant steals nutrients from the stalk as it tries to fill grain, we call this ‘stalk cannibalization’. Fields that started with very high yield potential and were then impacted by the drought are the most likely to have some sort of cannibalization going on as the plant tries to fill a high number of kernels.  Fields that died prematurely, are naturally drier, have very high populations, or have storm damage should be checked regularly as they have other compromising factors impacting yield.

Use the PINCH and PUSH tests. For PUSH – Push the plant tops away from you at a 30 degree angle. If they don’t return to vertical or they snap, they may be compromised by a stalk rot. For the PINCH test – Pinch the lower internodes of the plant. If they are crushed easily by your hand their integrity has been compromised. If 10% or more plants fail these tests consider harvesting the field early to reduce possible losses.