How Much Influence Does Winter Weather Have on Overwintering Pests? 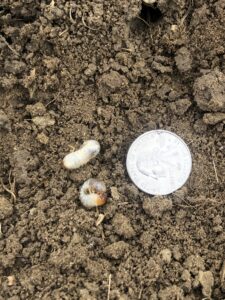 How Much Influence Does Winter Weather Have on Overwintering Pests?

As we suffer through repeated cold spells and wind chill warnings, many growers wonder if there is a bright side – are the pests in my fields being killed? The answer is complicated. It includes a lot of ‘It Depends’, and is generally not what we want to hear. Most pests that overwinter in the midwest have adapted to have good survival rates and any effects the weather has usually will be minor.

A range of pests

Examples of pests that overwinter in the Midwest include northern/western corn rootworms, bean leaf beetle, soybean aphid, Japanese beetle, alfalfa weevil, western bean cutworm, European corn borer and a variety of plant pathogens. Each has a different tolerance for overwintering conditions. Tolerances are influenced by temperature lows, temperature fluctuations, durations of cold spells, and sometimes moisture. These species have adapted well and can be more tolerant that we would initially expect. For example, studies have found that corn rootworm eggs can survive at temps of 14°F, western bean cutworm larvae handle cold most cold spells unless temps are below 9.3°F, and that the pathogen that causes frogeye leaf spot can survive very well unless the temperature is less that 17°F for periods longer than 10 days.

Insects uses a variety of strategies to limit the effects if months of cold weather. This includes moving into protected area such as soil (western bean cutworm, corn rootworm, Japanese beetle), plant debris (bean leaf beetles), or specific plant structures (soybean aphid to buckthorn leaf buds) and then entering a state of hibernation. They may also produce compounds that act like antifreeze within their bodies or cyroprotectants that help them cope with actually freezing.
These tactics help to greatly reduce the likelihood they experience temperatures or conditions that are lethal. For example insects overwintering in the soil usually head to depths of 4 inches or more which creates a large cushion that doesn’t fluctuate easily. Some rootworms or western bean cutworms have been recorded at depths of 12-15 inches! The coldest 4-inch soil temp that ISU has recorded this year is one county at 15°F, still above lethal levels. It is very likely that survival rates (due to cold) will be normal unless things take a drastic turn.

Weather that can have an impact on pest pressure is how far south the cold extends and spring soil moisture. Cold fronts that move farther South than average can help to reduce pests such as black cutworm, armyworm, corn ear worm, and rusts. While they’re populations won’t be killed entirely, they may come from a more Southern starting point which could delay impacts in the Midwest. Spring soil moisture that leads to saturated soil conditions around corn rootworm egg hatch (late may/June) can reduce larvae. Larvae are much more vulnerable than eggs due to their need for oxygen and food. Long periods of saturation limit oxygen and the ability of the larvae to search for corn roots to feed on. Survival rates can be significantly reduced in these conditions.

Overall we cannot depend on reduced population size due to weather. We must use good integrated pest management strategies to control pests in our fields.