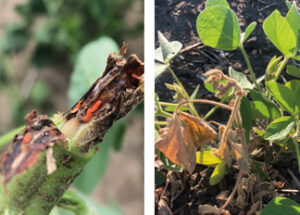 Soybean Gall Midge (SGM) is a new pest to soybeans that was first reported in Nebraska in 2011. For many years it was an isolated pest of previously damaged crops that didn’t warrant concern. This changed in 2018 and 2019 when the population exploded. SGM became more widespread and didn’t seem to require crop damage to lead to penetrate the plants. Infestations also occurred much earlier in the growing season than normal leading to significant yield loss in areas.

Soybean Gall Midge has been identified in 90+ counties of Nebraska, Iowa, South Dakota and Minnesota. Adults of this pest are a tiny fly similar to a mosquito but much smaller. They emerge early-mid June and lay eggs in the base of soybean plants through small fissures in the outer layers of the stem. These eggs hatch and the larvae feed on stem tissue, cutting off nutrients to the plant and eventually killing it. This life cycle takes roughly 30 days to complete. It appears that we will have two complete generations during a summer along with a partial 3rd that will over winter in soybean residue to start the cycle again.

Scouting for Soybean Gall Midge can be tricky. Here are some tips to help. If you have an area you suspect may be Gall Midge, contact your Jacobsen Seed Representative for help as well.

There are currently no consistent control measures for this Soybean Gall Midge. Insecticide applications have shown little benefit since the pest is protected inside the plant. There are many ongoing studies that are focused on cultural practices that reduce fissures or wounds at the base of the plants. These tests include hilling soybeans, genetic differences, cover crops, and eliminating practices like rolling soybeans after emergence.

Even though control measures are uncertain, it is very important to scout for SGM. The main goal of scouting is to identify and track the pest to continue to learn more.  To sign up to receive alerts regarding adult emergence, send an email with your name, phone number and email address to justin.mcmechan@unl.edu with the subject line “SGM Alert Network”. Those that signed up in past years do not need to sign up again.