Palmer Amaranth: Watch for this New Threat in the Field. 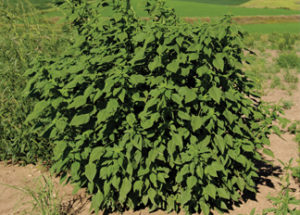 Palmer Amaranth: Watch for this New Threat in the Field.

What is Palmer amaranth?

Palmer amaranth (Amaranthus palmeri) is a aggressive member of the pigweed family that is native to the southwestern United States. It has spread throughout the southern U.S. to become one of the most significant weed pests in cotton and soybean production. Palmer amaranth’s spread northward has been increasingly monitored, but 2016 saw a large surge in northern populations as it was introduced into conservation plantings across the upper Midwest. It has been confirmed in 33 Iowa counties and states including: Illinois, South Dakota, Minnesota and Nebraska. Palmer amaranth is poised to become a serious issue in northern fields do to its high competitiveness, adaptability, rapid growth, abundant seed production and resistance to multiple herbicides. This species looks very similar to waterhemp and other pigweed species. Therefore, it is important to recognize this threat through scouting and correct identification and act accordingly. You should implement a ZERO tolerance policy if it is found in your field or region. This includes a chemical plan with multiple modes of action, overlapping residuals, and even walking fields and pulling plants should be implemented to slow the movement of this invasive weed.

Is it Palmer amaranth or waterhemp?

Palmer amaranth is closely related to waterhemp and the two can look very similar. Red Root Pigweed and Smooth Pigweed can also closely resemble Palmer. Therefore it is important to be prepared for these differences while scouting.