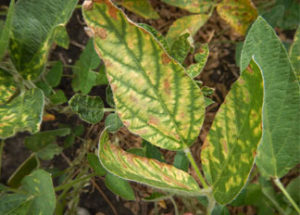 Soybean sudden death syndrome or SDS is a fungal disease that has increasingly become a focus point for soybean producers. Found originally in Arkansas over 40 years ago, the disease can be found in most of the North Central region of the U.S. including the states of Iowa, Minnesota, Nebraska, Missouri and Illinois. The impact of infection can vary widely, from almost unnoticeable to nearly complete yield loss in heavily infected areas. Yield loss is determined greatly by when symptoms begin to express themselves. The earlier in reproductive stages the higher the potential losses as flowers and pods are aborted, causing a total loss of grain. Yield impact is lower when symptom development occurs later during pod fill, causing a reduction in grain size.