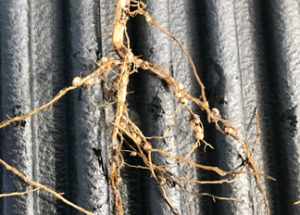 When someone talks about nitrogen requirements for a crop, many people automatically picture corn as they carry on the conversation. It can be hard to remember that soybeans actually need 4-5lbs of N per bushel over the course of the growing season, or roughly the same N requirement as a 240bu/ac corn crop. It is important to recognize that it is not the soybeans themselves that produce the nitrogen that they need, rather a bacteria known as Bradyrhizobia japonicum. Soybeans and B. japonicum have formed a symbiotic relationship meaning both organisms benefit from one another. This relationship can be seen as the nodules on a soybean’s root system. B. japonicum colonizes a young soybean’s root systems, create the nodules, and begin processing nitrogen gas from the atmosphere into a plant available form to feed the soybean. In return, the soybean plant supplies the bacteria with a steady supply of carbohydrates. This bond forms naturally in most field conditions but not always (see reverse side). There are a wide range of inoculants products on the market
today including seed applied and planter box peat. At Jacobsen Seed, we offer Optimize XC which is applied with regular seed treatmentand has a shelf life of 120 days. Contact your local Jacobsen Seed Representative for more information.

If any of your planned soybean fields fall in to one or more of the groups below, consider
inoculation.
• Soybeans have never been grown. Yield increases can vary widely due to nitrogen supply in the soil but yield increases as high as 20% have been seen.
• Non-optimal soil pH. Soil pH that is below 6.0 or above 8.0 can lead to a decrease in nodulation.
• Soil has high sand content.
• Fields have been flooded. Fields that have been flooded for more than one-week can have a significant decrease in soil bacteria due to the lack of oxygen. Fields that have been flooded along rivers and have had large amounts of sand or silt deposited may also benefit.
• Longer than 3-5 years since soybeans were planted. Recommendations from most universities suggest inoculation if it has been longer that 3-5 years since soybeans have been planted. The bacteria are still present in the soil but at low enough
populations that a jumpstart may be profitable.