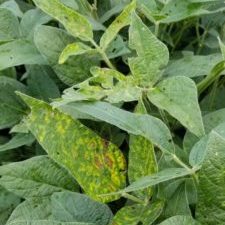 Soybean Sudden Death Syndrome (SDS) is a disease found across Northern soybean growing regions in the United States and in Southern Canada. It is caused by a soil borne fungus called Fusarium virguliforme. Presence and severity of the disease can vary greatly but once found to be present, management should be done every year the field is in soybeans.

Disease symptoms of SDS present themselves in two different ways, with both foliar and root/stem symptoms to observe.

Foliar – Yellow then progressively necrotic lesions in between leaf veins. Leaflets eventually drop to the ground but petioles will remain upright on the stems. The symptoms looks very similar to Brown Stem Rot. BSR can be ruled out by examining root/stem symptoms.

Root/Stem – Taproots and stems up to 2 inches above the ground will be rotted when infected with SDS. Cut stem open lengthwise to reveal a red/brown (sometimes light gray) discoloration of woody tissue. The pith will remain bright white during an SDS infection which is how it is differentiated from BSR, where the pith will be brown/black. Sometimes a blue tinged fungal growth can be seen during on the surface of the roots with an SDS infection but soil moisture must be high.

Fusarium virguliforme survives very well on infect residue and in the soil for many years. Soybeans are infected very early in their life cycle. Heavy disease pressure is often associated with soybean seeds and seedlings sitting in cool, wet soil for extended periods of time. After infection, the fungus grows in the root tissue where it produces a toxin that eventually travels to the leaves, resulting in the late season foliar symptoms we now recognize.

There are no soybean lines that are fully resistant to SDS but varieties do vary in tolerance levels. Choosing varieties with strong tolerance will help combat yield loss. Using seed treatments such as ILeVO® (Bayer CropScience) will reduce infection as well. There is also a known relationship with SCN infections and higher levels of SDS. Using SCN tolerant varities and SCN seed treatments such as SaluTec Xtra can reduce SCN stress and SDS infection as well.

Other methods of disease management include the following